Persevering Despite the Lockdown: Interview with Founder of Starvox Entertainment 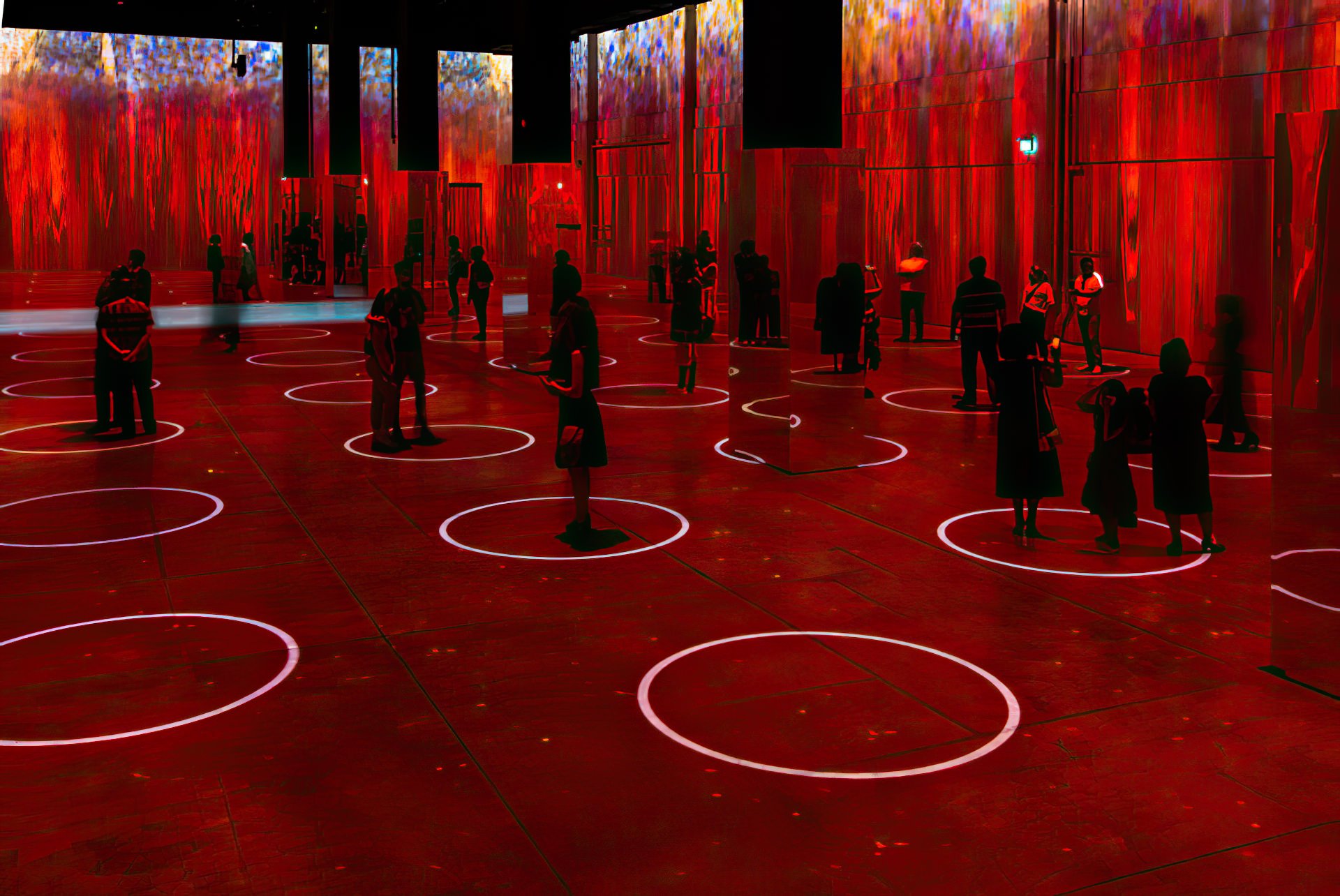 Just over a year ago, a groundbreaking partnership between Starvox Entertainment (founded by Corey Ross) and Show One Productions (founded by Svetlana Dvoretsky) created Lighthouse Immersive to bring you the Immersive Van Gogh Exhibit. The world has changed significantly since Corey and Svetlana combined their efforts to create a permanent arts space in downtown Toronto, but Lighthouse Immersive perseveres as one of the only exhibits in Canada working on opening its doors this summer (while meeting social distancing standards). As we get closer to the opening of the Drive-In experience on June 18th, Ross takes a moment to reflect on how the partnership came about, and share some candid thoughts on how the performing arts industry can be better positioned for the rest of the lockdown.

How did the partnership between Show One and Starvox Entertainment come about?

CR: The partnership with Show One Productions began about 15 years ago. A gentleman who was running the Toronto Arts Centre at the time introduced us. Svetlana was starting to do shows there and I had done a number of shows there as well, so that is how we originally met. Over the years we became close friends, occasionally we’d do a show together. Svetlana is a high-end producer, she does opera, classical music, and ballet; the type of work I was doing was in the more popular, pop-concerts, musical theatre side of things. So my line has been that whenever Svetlana could condescend to do something a bit more low-brow we’d do something together! The highlight was the John Malkovich show that we did about seven years ago. When she saw that we did so well with Banksy and heard about this Van Gogh Exhibit, she called me up and asked me if I’d be interested in partnering, and that was the seed of it.

What are some of the unique challenges that you anticipate visual arts exhibitions will face in the coming months?

CR: The first challenge is how do you create? Does your venue or museum — or however you display your art — lend itself to social distancing? What does that do to the capacity or space and is it financially viable? What impact has Covid had on most of the traditional exhibitors of art in Canada and internationally? How are non-for-profit organizations that depend on charitable giving going to cope in a market that has been hurt financially? Will investors be in a position to give as much as they have before?

Another challenge that they face is a Human Resources challenge: most of these organizations have had to lay off their people because they can’t afford to pay them right now while they’re closed. So will those people be interested in coming back and how quickly can they restart? The final challenge is that, from a ticket-sales perspective, the industry is pretty dependent on tourism. So if tourism isn’t what it was, then that is going to be a challenge. From an artistic perspective, the challenge really is for curators to get out and see art, which of course involves international travel, and artists need to get here and create things, so it depends on what the art is and how easy it is to travel.

How is Lighthouse Immersive poised to take on these challenges?

CR: We’re at a pretty lucky position because we’re just a totally different type of concept in terms of how our art is exhibited. First of all, we’re in a huge venue —a 45,000 sq ft venue— there’s a lot of space for social distancing. We’re going to have financial challenges because our capacity is going to become lower as we accommodate social distancing. But we can extend the hours, as long as there are wage subsidies it becomes possible for us to extend the hours.

The way that you see the art, through giant projections on walls, also allows for social distancing. We can have lots of people socially distant enjoying this piece of art. Whereas if it was a 3 ft by 3 ft painting on the wall, only so many people can experience that at once while social distancing. Furthermore, we’re in a really unique position because there is a ramp at the door of our building and space for cars to drive in safely. So it’s allowed us to do this crazy idea of a drive-in show.

What are some of the good things that you’ve seen arts organizations doing during this time?

CR: Most arts organizations have laid off or reduced the salary of their arts workers, so we’re really happy that we haven’t had to do that, and that’s because we’re able to continue to present what we’re doing. I was recently on a committee of producers —my main business is theatre— so on the theatre side, there are discussions on what we can do to facilitate the recovery of the industry. People might not know but in the film and television business, when a producer hires an actor or technician to do a television show, there are tax credits to facilitate attracting productions to Canada and the production of Canadian content. In the theatre world, non-for-profit organizations like the Stratford Festival and the Shaw Festival receive grants but commercial theatre producers don’t receive tax credits similar to what commercial film and television producers have.

So David Mirvish and I are trying to engage the government in that discussion, and if we’re successful in that then I think the commercial theatre world in Toronto will be completely transformed. And we have a shot at coming out of Covid and becoming a worldwide center for production of shows. So I’m very excited about  that. It’s something that I thought for years should have been discussed. I don’t understand what the difference is, the same actors and technicians that are hired to do a film would receive tax-credits that they are not receiving when they’re doing theatre, even though theatre, from an economic development perspective, helps restaurants and everything around the theatre. So that’s something that I think is very cool and positive that could come out of this.

What other ways can the local/Ontario government better assist production companies in Toronto during this difficult time?

CR: There’s been zero talk because really we’re the only organization that’s opening its doors right now. There’s no talk about coming up with the measures that would make it safer to open our doors to the public, other than a vaccine. For instance, we have decided to do social distancing at the time when we do a walk-in version of our show — but we’re looking at other measures, including sensors that determine whether people are symptomatic when they come to the door. We’re also looking at how to sanitize the venue between shows, those measures are quite expensive and there’s been no funding allocated to that. There’s no one really available to ask. If I see a method of sanitation that they’re using in Israel or China or hospitals around the world, it’s not my area of expertise to decide which one is better and there is no one that the government is supplying as the person to ask what is appropriate and determine what is functional and what isn’t.

What excites you the most about presenting the Immersive Van Gogh Exhibition in this difficult time?

CR: First of all, the initial excitement to me was the intersection of technology and art. When I saw the show that Massimiliano Siccardi created in Paris, I really felt that I was seeing something completely new. A completely new way of looking at art, and a completely new way of looking at film. I just think that there are so many future possibilities with this type of immersive experience. It could be that the next Mission Impossible, instead of being just projected in front of you on a screen at a Cineplex theatre — an experience that you can now duplicate at home — you could enter a more experiential room where the narrative is being told in 360 degrees around you and you’re moving through physically. So it was an interesting opportunity for me to hook up with this creative team and be one of the first to bring it to North America and to be at the forefront of what I think is going to be a long-term exciting opportunity.

In terms of how Covid’s changed things, it’s kind of almost a torch bearing moment to be the last company carrying the last fire of culture and relighting it for the people of Toronto and Canada, and trying to find a place to do that. Again we were just really fortunate that we chose the kind of show where you could do that and the kind of venue where you could do that. I think 50% of it is luck and 50% of it is being to think innovatively and pivot to the times, and we were already doing something that was innovative in terms of a new type of art show. So we’re pushing the pocket of innovation by introducing cars into it, but it’s in the spirit of what the show was to begin with.

Looking further into the future, what are some exciting projects/ideas that you’d like to explore post-pandemic?

CR: On the arts side, I’m certainly interested in seeing how we can begin to bring and create new shows around other artists. We’re looking at other options already, whether it’s a more contemporary artist like Banksy in the same venue, or another historical artist altogether. But I’m also just interested, as I said, in the connection between filmmaking and the Immersive concept. The Lighthouse venue will be completely fitted out to do that. We don’t know what will happen with the Toronto International Film Festival, but I was looking forward to getting the filmmakers who would be coming into town for that to see what we’ve created for Van Gogh. I was hoping we’d be having really fruitful and creative discussions with filmmakers from all around the world that we could display the technology in Van Gogh for. What would, for example, Steven Spielberg be able to do with an Immersive concept? How could you repurpose the Hitchcock films with an Immersive concept? So it may be a real disappointment, or maybe TIFF still happens in some type of socially distanced form, only time will tell. There’s so much possibility around this, and it’s so different and fresh and we’re just so excited about it.

Persevering Despite the Lockdown: Interview with Founder of Show One Productions